Picture a cute little hand crafted cabin located in the middle of no where. It's set back in the woods, surrounded by mountains and trees. There isn't heavy traffic going by, rather you can here the planes taking off and the Hondas on the runway. For some it isn't much but to others, it is the perfect mix between a place of personal space and everything to start a family in. Welcome to Our Cabin. The cabin that I think changed the course of my life as well as Kyle's, but also was the place that built our relationship for what was to come. 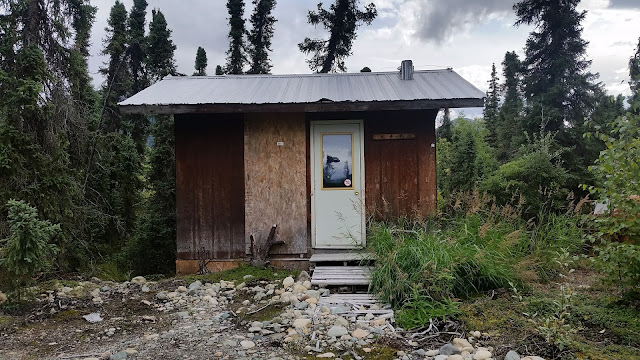 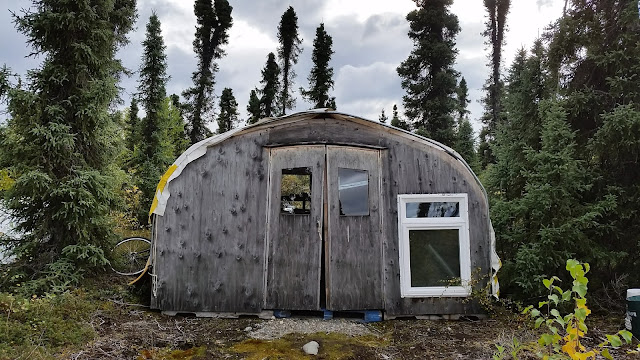 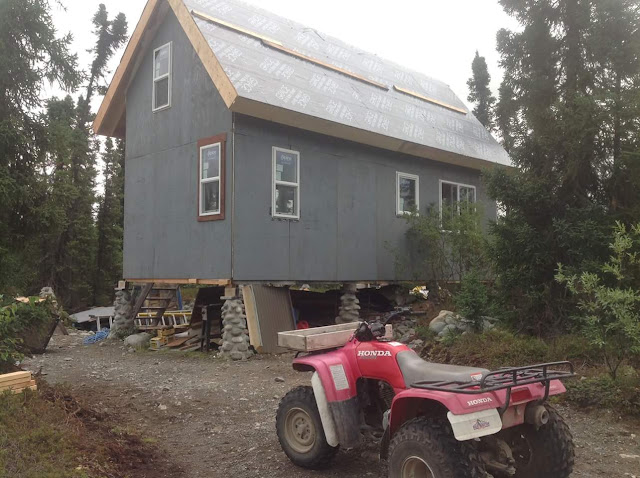 As a 26 year old, almost widow/fiance'/girlfriend, whatever technical term you want to use, I would have never guessed my life would be the way it is now. I moved out here from a small podunk town from Pennsylvania. I have always wanted to be married, start a family, and finally have that title "wife." Years before I moved out here, I have never had my "own" house or place to call my "own". I have lived with roommates for over 8 years. I have been in relationships I thought would end in marriage, yet here I am single again still with that hope to be married and start a family one day. I could have been married if I really wanted to, but none of them would have brought me out here. I looked forward to the days where I could plan and design a house. I would imagine what type of house could be built from scratch. It brought excitement into my life as I have planned this "wife" life on several occasions. Yet none of them have panned out the way that has been planned. "Just maybe.....maybe you don't want to change the story, because you don't know what a different ending holds." -Ann Voskamp 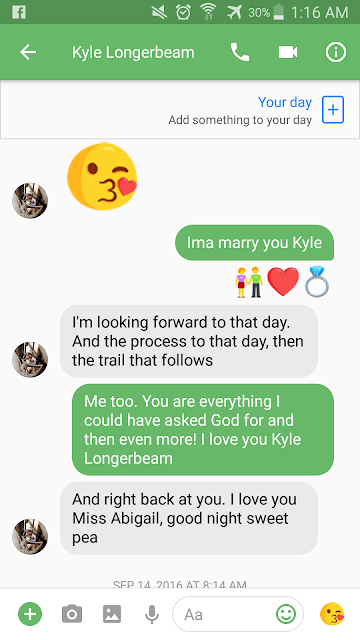 So after planning, plans falling through, heartbreak, hopes, and dreams never amounting to anything, I packed up and moved up here to do my student teaching in Alaska. I met many people who welcomed me and allowed me to be apart of their lives. I signed on for another 5 months, after initially saying I'd be here for 6 weeks. During the five months of being a full time teacher, I met Kyle Longerbeam. 👷💃 We hung out countless times, would text quite a bit, and he even asked me out. To his disappointment I said, "No." I had to be honest at the time because I was not ready to be in a relationship. I had just gotten out of one several months prior to us getting to know each other. So, he said, "OK" and we continued to be friends. Over the next several years and even to this day, THAT cabin built our relationship as we built it together.

That may seem strange but it was far from strange in our world. We both put blood, sweat, and tears into THAT cabin. I worked with him multiple times every weekend, on weekdays, and honestly I just absolutely loved hanging out with him at any given time he was working. We would banter, be sarcastic, and share memories that now as I look back, am thankful to have. I had no idea he would pass away before we even could finish THAT cabin. We joked that one day that when he was married, I'd move in upstairs just because I was THAT kind of friend. Though both of us knew that would NEVER happen and our relationship would drastically change if we ever dated someone else. I was just thankful he would let me come "help." Actually let's be honest, he probably loved my company just as much as I loved his (most days). 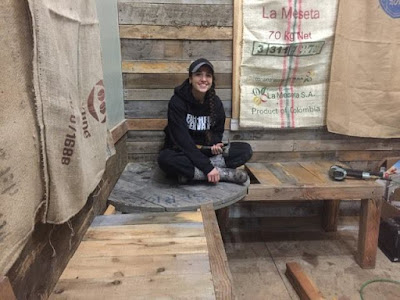 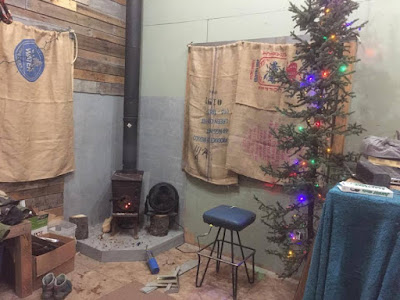 In THAT cabin, we had countless talks about our "relationship." It was an never ending, on going, discussion almost every month. We would have "sit downs" and discuss the reasons why we "could't" "shouldn't" or "wouldn't" date each other. Often, I would end up in tears because it hurt me and it hurt him that we just never were at the same place with it all. I would leave knowing he was frustrated with me, or vise versa. However, we would always seem to mend the friendship and continue being apart of each others lives. I would pop over to "check in" with him or just be over there to listen and keep him company. He didn't allow or invite many people over, so my "pushy" "I'm going to be your "friend" attitude allowed our relationship to grow into what it became in June. 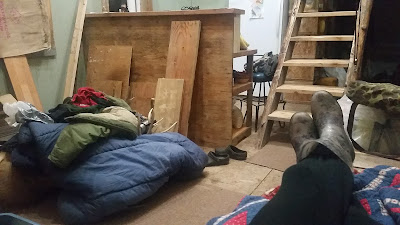 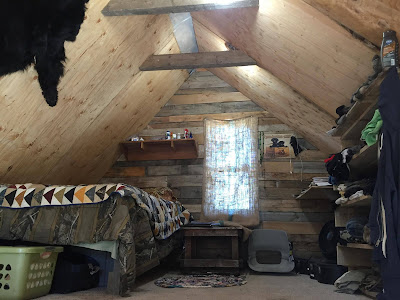 In THAT cabin, I have cried countless tears over the past several years, more so now than ever before. I painted the walls, helped move the weather port, assist in building the pallet wall, design the pantry, jack up and move the small cabin, organize, clean, and continually cheer Kyle on as he worked to fill a dream he had of building his own home and living in Alaska. I loved his ambition, hard work, and determination to finish what he had started. I loved watching the progress over the years and finally be able to hang out with him in the bigger house rather than the small mouse infested cabin we would spend hours in talking and hanging out in over the years. I was one of his biggest cheerleaders and I am thankful that I had that opportunity to do so. So I have quite a bit of stock in that cabin, not as much as him, but I was there right by his side from start to where it is now. 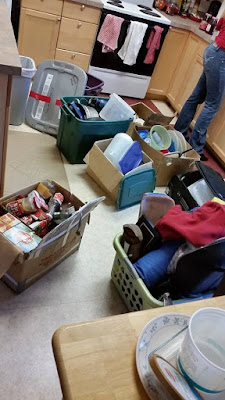 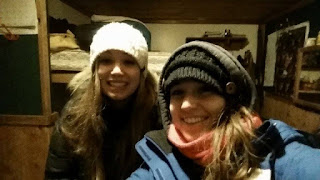 We planned and planned to build THAT cabin to become our home for at least the next year. I recently talked to one of our friends who said, "everything that's here is a clear indication that he was prepared and completely building this place for his bride." To know that I was going to marry him, brings me so much joy, even when the tears don't stop rolling. He wanted to make it comfortable, functional, and affordable. He doesn't know it, but I didn't care if we had "everything" all I really wanted was to be married to him and wake up in "our home." Somehow I feel robbed that I will never get that change with him. However, God has bigger and I think better plans for THAT cabin than I ever will.

I can say that the memories we built will NEVER be burnt, given away, used up, or taken away. I cherish each and every memory from the sarcastic jokes, to him falling down the scary stairs....you know what I mean if you have ever been in there, to Asha, Kyle, and I hanging out sharing laughs, to skinning a bear while I colored, to countless stressed out moments of him holding me while I cried, to story upon story shared time and time again. The memory of him leaving a lawn full of dishes, clothes, and stuff that Asha and I cleaned and took care of. It is also the memories of him telling me in the middle of a misunderstanding how he would marry me right then and there, to the time planned of eloping just so we could live together and forgo the goodnight sayings each evening. Of course I could go on and on but there are just several memories that stick out in my mind. I am thankful that I had years and years of fond memories with Kyle. I just have some amazing texts from him about THAT cabin. Such as: "Good thing you don't have to live it then because there's going to be a lot of wood, and animals on the wall. lol Ultimate bachelor pad. No woman will ever stay around after stepping foot in it." -2015 I guess some things change over time! 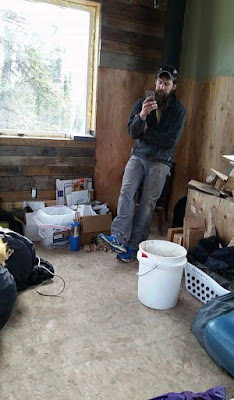 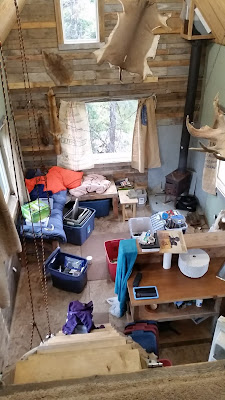 As these memories remain, I create new ones there. I have written several blogs there as the words just seem to ooze out of me. It has been a place of solitude, healing, taking a walk down memory lane, as well as a place to remind me how good the Lord has been to me and us. I am proud of Kyle for all his hard work over the years, thankful for the friends who helped him, came and to sit with me there when he can't, and the good talks I have had with God. This is a journey, a process, a stretching period in my life, and my life has been forever changed since the first day I met Kyle. Funny how I can write so many words just about one place. I don't even do THAT cabin justice for what Kyle has put into it. I can only speak from my side of it all, but I  know Kyle is proud of who I have become through all of this and I do wish he were here to see the impact he has made on my life along with the many others.

I wanted to just share some thoughts and feelings on how this whole process and how it has been going. I am not going to be buying THAT cabin, as I do not think this is the best financial move for me. I know that it will be in good hands and that the Lord has His hand in it all. Nothing is finalized yet,so if anyone wants to know, there you go. I finally cleaned out his belongings for the most part and I could just help my grieving process continue. It is not complete or finalized but it has been a good cleansing for me (as well as the cabin ;)). It is just a place yet it isn't. It is a part of my life, a majority of Kyle's and I am thankful for what it was and is. 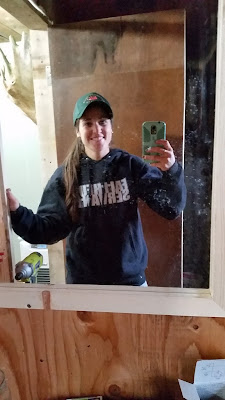 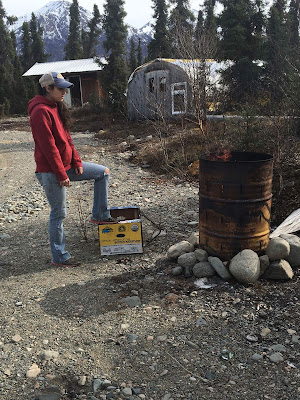 Our home is not here on earth, we must set our eyes upon our heavenly home. Heaven, where the Lord has gone before us to prepare a place for us. Each and everyone of us who have chosen to accept a personal relationship with our Heavenly Father. We get wrapped up in the world around us. We collect personal effects and belongings. We get the items we "need" and items that we want. Eventually, we will pass from this earth and cannot take such items with us. They really don't matter in the grand scheme of everything. However, while we are here on earth, we are called to live life, but not get caught up in this life we live. THAT cabin was exactly what it needed to be when we needed it. I will forever remember it and be thankful for it.
Posted by Unknown at 7:19 PM